Oil giant BP is committed to tackling climate change. This is what the company’s CEO said. He insisted that hydrocarbons such as oil and gas will have an ongoing role to play. They specifically said in the global energy system mix for years.

“It may not be popular to say that oil and gas is going to be in the energy system for decades to come but that is the reality,” BP’s Chief Executive Bernard Looney told CNBC on Monday.

He said that replacing coal with natural gas, thereby reducing carbon emissions, “has to be a good thing.”

“And then over time we will decarbonize that natural gas,” he said. Speaking to CNBC’s Hadley Gamble at the ADIPEC energy industry forum in Abu Dhabi.

BP’s Looney highlighted that the International Energy Agency’s “Net Zero” report in May noted that, in 2050, global oil supply “in the net-zero pathway” would still amount to around 20 million barrels per day,

“So any objective person … is going to say that hydrocarbons have a role to play, the question then becomes: what do you do about that? And you try to produce those hydrocarbons in the best way possible,” Looney added.

Gas and Oil Industry | Where Will The Oil Industry Spend Its Money In 2022?
Energy Transition Leaders, Oil and Gas Giants, Hit Back at Climate Critics 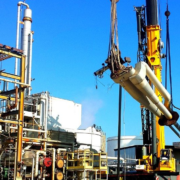